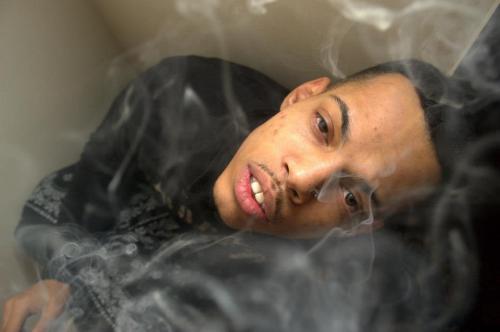 Me, Myself & I in a Fantasy *Final Version*

This is the final version of all the edited self portraits of myself.

I love this one the most because the colours aren’t so harsh and looking at this photo gives  some sort of angelic look to it, I chose to close my eyes because i didn’t want to show any expressions due to my eyes being big and very expressive… I like the idea of this photo being mysterious and fantasy like, kind of reflects my personality.

Me, Myself & I in a Fantasy (unofficial)

This is a photo i took of myself in October 2012 to represent a self portrait of myself. I took many photo’s but this one image happened to be my favourite out of them all, I edited it in 3 versions and this is one of them. It was not my favourite edited version, wanted to go for something more softer.

I’ll show my final version in my next post.

Modernism has become corrupt and oppressive. Riddled with doubt about the continued viability of the notion of progress, the façade of modernism has begun to crack, and conservative forces that have long been opposed to modernism have rushed, wedge–like, into the interstices to fill and expand the space with their own worldview.

In the United States, modernism, in a form identified as ‘secular humanism,’ has been attacked by the so–called ‘religious right’ whose conservative ideology has seriously undermined the very constitutional foundations of the whole American modernist experiment. Fundamentalism in nearly all of the world’s major organized religions — Christianity, Judaism, Islam, Hinduism — has risen sharply in recent years in direct opposition to modernism.

Many Christian fundamentalists still agree with the protestant reformer Martin Luther who believed that ‘reason is the greatest enemy that faith has: it never comes to the aid of spiritual things, but — more frequently than not — struggles against the Divine Word, treating with contempt all that emanates from God.’ (Colloquia Mensalia, ‘On Baptism,’ paragraph CCCLIII).

The term postmodernism is used in a confusing variety of ways. For some it means anti–modern, while for others it means the revision of modernist premises. The seemingly anti–modern stance involves a basic rejection of the tenets of modernism, such as belief in the supremacy of reason, the notion of truth, and the idea that it is possible through the application of reason and truth to create a better society.

In 1970 she took a job at Rolling Stone magazine. In 1983 she began working for the entertainment magazine Vanity Fair. During the late 1980s, Leibovitz started to work on a number of high-profile advertising campaigns. From the 1990s to the present, she has been publishing and exhibiting her work.

Annie has worked with many magazines such as Vogue and Vanity fair which are two magazines I read on a monthly basis. One of my favourite picture of Annie’s is this photo of Agelina Jolie that I have above this post, I find this photo amazing and eye catching.

In 2005, the Brooklyn Museum of Art did a retrospective on her work entitled “Annie Leibovitz: A Photographer’s Life, 1990-2005.” As busy as ever, Annie Leibovitz continues to be in demand as portrait photographer, often capturing arresting images of today’s celebrities.